Fun Run Report, is that a thing? 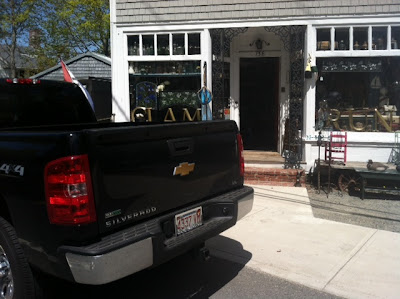 There's an antique shop in Essex that I ride by almost ever day.  Or, I did, when I was riding every day.  Until my running distances go up a bit I won't be going by it as often.  At any rate, they spell messages in the windows with big letters.  Sometimes it's something silly and religious about Jesus or something, or sometimes it's something overtly patriotic, which I can also do without.  But often it's something cute and seasonal, or with a fun pop culture reference.  It can only fit two shorter words, though, so it's like, Spring Sprung, or Let It Snow.  When the Hunger Games movie was coming out you could tell they were a fan and they wrote Odds Favor, which I thought was really cool because I was pretty psyched to see that movie.  Anyway, the other day it said Clam Run, because the Happy as a Clam 5K was on Friday.  That's a good segue, right?

So, I'm not a very good runner.  I'm not sure what it is, but whenever I see myself running I'm reminded of this: 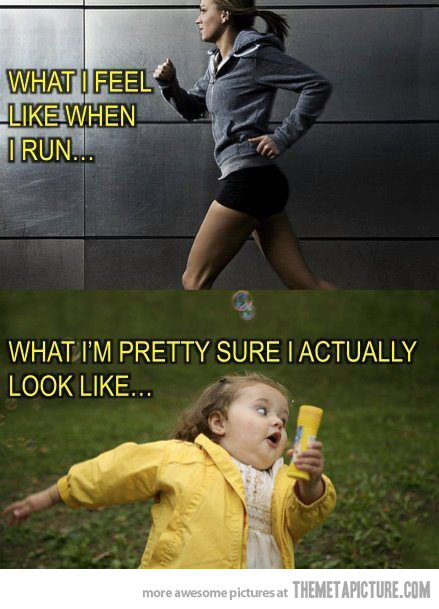 For reals.  It's that bad.  But I'm trying to go faster, even though I look just as uncoordinated going (moderately) fast as slow.  My last 5K I set a new PR of 22:33, which is something like a 7:15 minute/mile average, and I was hoping to do 22 even this time around.  This run is a little hillier, though, so I didn't do nearly so well.  I also think I ate too much throughout the day (the race was at 6 PM) and, even though I stopped eating 3 hours prior to running, my gut started to revolt in the last mile, slowing me down by quite a bit.  My first mile was 7:05 and third was 7:49.  I finished with a time of 23 even.  Way slow.  But I finished 2nd overall for the ladies, won my age group, and was 14th out of 100+ overall.  So that was cool, and it felt fun to be near the front of a race like that.  Hello, Competitiveness.  Anyway, I know it's not the best idea, as my marathon training plan begins this week, but I'm going to go do a 5 mile race this Friday and try to fix my digestive mistakes.

Isn't it sort of funny that my very fastest mile isn't even close to an elite women marathoners slowest mile out of 26?   Funny?  Haha?

Anyway, I reached a great place on Friday with the running, though.  See, maybe it's just me, but whenever I've been out of bike racing for a bit and I jump back in my predominant thought for the duration of the race is, "WHY?!"  As in, why did I pay money to feel this bad for this long?  That's how I felt during my first 5K this year, but at the Clam I was feeling at peace with the suffering and was able to focus on how damn fun it is to race and go fast (relatively, of course).  So, cool.
In other news!  More boat repairs took place over the weekend, although no sailing did.  Centerboard compartment has been resealed (although we're looking for a more long term solution to a sort of silly design), all hatch covers on the amas (floats) have been replaced with new ones, so feel free to step on them as much as you like.  The last thing we need to fix (until the next thing comes along) is the trampoline, but we assessed the situation and have come up with a plan, it'll just have to wait until next weekend for the execution. 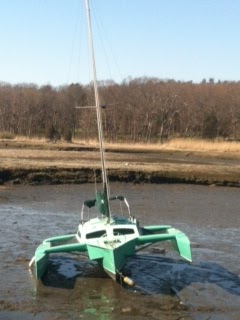 And last but not least, see how, when the tide is out, the boat sits on the vata (main hull) and the down wind ama?   I was really concerned that when we climbed out on the top ama to fix the hatch we'd teeter-totter the boat over onto it and potentially do something really damaging to it.  Cody didn't think our weight would be significant enough to rock it over.  Turns out, we both need to go on diets because our weight was more than significant enough to rock it over.  The good news?  The boat didn't really seem to mind.  Can you picture us sitting out there in the mud with 6 clammers digging within 100 feet of us?  The boat starts to tip towards our side and we start running for the other side, but to no avail?  Hilarious.
Posted by Marian at 9:13 AM

Hey,
My name is Nate. I am a partner at SIX Nutrition. We are expanding into the women's cycling market especially Mountain Biking and would love feedback on our sports and recovery drink.

I'd like to offer free 1 month samples of our sports drink, HYDRA, if you'd like to test and review.

Contact me at nate@sixnutrition.com or on any of our social media. We'd love to work together!

Marian
I used to blog about racing bikes, but mostly these days it's all about a big green boat, plans of running a marathon, and my dog.